Vaadin is an open source Web application framework for rich Internet applications. In contrast to JavaScript libraries and browser-plugin based solutions, it features a server-side architecture, which means that the majority of the logic runs on the servers. Ajax technology is used at the browser-side to ensure a rich and interactive user experience. On the client-side Vaadin is built on top of and can be extended with Google Web Toolkit.

This page holds information and resources for developing with the GWT-based Vaadin-Framework. For general information to this framework see: https://vaadin.com/faq

(quoted from Wikipedia:https://en.wikipedia.org/wiki/Vaadin, the free encyclopedia)

The Vaadin architecture can be split very roughly into client and server side.

The server side holds all the business logic and services as well as the standard java vaadin components, which will be translated into JavaScript later on.

The client side incorporates the GWT-part as well as client side specific JavaScript code, to do some more dynamic manipulation on the browser side.

All Vaadin Components are written in plain Java. There is no need to program in JavaScript or even HTML. This all will be compiled by the framework. See the next section for supported browsers.

NOTE: From release 7.2+ all permutations have been merged into a single one - refer #13274

The cdm-vaadin project is a stand-alone war Eclipse / Maven project, which includes cdmlib dependencies allowing it to function as a full-fledged web application. This allows for testing the vaadin framework with the cdmlib. This project itself is not a target for deployment as a webapp, but is integrated into the cdmlib-remote-webapp project as described below.

For more details on the Vaadin integration in Maven please see https://vaadin.com/wiki/-/wiki/Main/Creating+a+Maven+project
This maven plugin is base on gwt-maven-plugin. Therefore the Goals and Parameters Reference of this plugin also accounts to the vaadin plugin.

With Servlet 3.0+ all configuration other wise declared in web.xml can now be declared using annotations in specfic Java classes. The servlet deployment configuration for the project consists of,

NOTE: The 'Web Application Initializer' part of the configuration does not yet work for the moment (refer #4527) and is set for now in the web.xml.

The vaadin-spring addon provides build in access control in the SpringViewProvider: View-based security can be provided by creating a Spring bean that implements the interface com.vaadin.spring.access.ViewAccessControl (for view bean name and annotation based security) or com.vaadin.spring.access.ViewInstanceAccessControl (if view instance specific contextual data is needed). It is also possible to set an 'Access Denied' view by using setAccessDeniedViewClass(Class).

Configured in /src/main/webapp/WEB-INF/web.xml and also via the @VaadinServletConfiguration(productionMode = true, ...) annotation for the classes in the eu.etaxonomy.cdm.vaadin.ui package. The annotation based configuration does not seem to have an effect though.

The official Vaadin website hosts a directory of all available AddOn's http://vaadin.com/directory.

In order to add an extension to your project add the maven dependencies to your pom file.

The Vaadin Spring integration library helps you build amazing Vaadin based user interfaces on top of your high quality Spring based enterprise backend. Your UI classes become Spring managed beans, allowing you to autowire Spring based services directly into your UI code.

The features of Vaadin Spring include:

This event bus infrastructure complements the org.springframework.context.ApplicationEventPublisher in the following ways:

The event buses are chained in the following way:

Viritin is a server side enhancement library for Vaadin. It fixes some bad defaults in the core framework and provides more fluent and intelligent API for existing components. It also provides several major enhancements to databinding and provides completely new components made with server side composition (no widgetset is needed).

For the cdm-vaadin project the most important feature of viritin is the support for lazy data binding in List fields like for example the LazyCobmobox. The containers being used in Viritin are capable of using service layer pager methods to fetch items only when needed. See the Viritin blog - Connecting large amounts of data to UI. For a example implementation in the cdm-vaadin project please refer to src/main/java/eu/etaxonomy/vaadin/component/ToOneRelatedEntityCombobox.java

col-vaadin This addon allows to store contextual information in the component hierarchy (e.g. a property containing the id of a selected entity).

For a general overview on how to develop with Vaadin, you can refer to the online version of the Book Of Vaadin Some of the important aspects are listed here.

Normally, you need to:

Optionally, you can also: 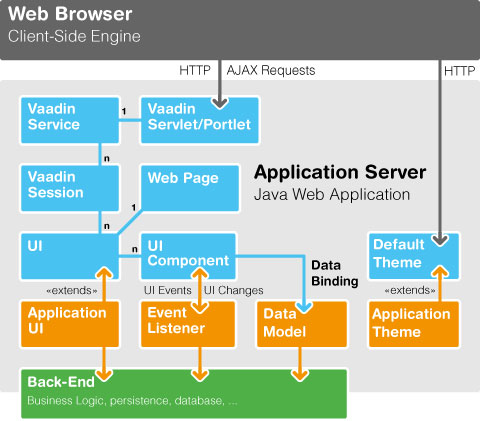 The principle idea of pattern is described in section 11.10.2 of the Book of Vaadin. An example of the pattern in the project is the 'eu.etaxonomy.cdm.vaadin.view.AuthenticationView' class. 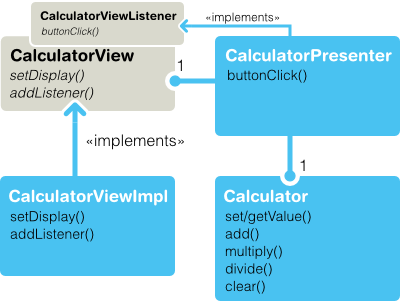 The spring-mvp pattern tries to decouple code and to create a structure so it is clear where to find the layout
and the logic of a application:

The example given in the book of vaadin however is quite simple and misses covering important aspects of complex applications. For complex applications with modular nestable ui components a more sophisticated implementation of the pattern is required.
The blow UML like class diagram shows a implementation which follows in the basic idea the devday-spring example given at the Vaadin Dev Day 2016.

There are recet essential changes in the implementation of the MVP pattern which are not documented here. Please refer to the following list of tickets and commits:

Further implementations of the MVP pattern¶

In the following the summary of the research on different implementations of the MVP pattern in vaadin applications is preserved as a reference:

The spring-mvp-vaadin-addon has not yet converted to Vaadin 7 but provides valuable insight into building complex applications by implementing the MVP pattern with Spring. It introduces a central event dispatcher mechanism. Scoped event dispatchers are providing a solid infrastructure for an event based communication between the views and providers. There is a quite extensive handbook on this project https://flexguse.files.wordpress.com/2013/02/manual.pdf . The project is abandoned since 2013!

The Vaadin4Spring Extensions and Addons project is to be considered an add-on for the official Spring add-on. It provides two community contributed add-ons for implementing MVP:

The shortcoming of the vaadin calculator example initially publishe in the vaadin blog has also been discussed in the comments of the blo model-view-presenter-pattern-with-vaadin. In the according discussion thread rajeeshk comes up with a more elaborated appoach of a MVP framework example implementation which is available at github
rajeeshk/mvpcalculator.

Stefan Reisner also addresses in his blog post VaadinSpring und das Model-View-Presenter-Pattern the question of how the dependency injection fits best into the MVP pattern. In the second part VaadinSpring Model-View-Presenter-Pattern Teil 2/2 he addresses the modularization and re-usability which is based on inheritance. This approach is limited my the fact that a 'master' presenter always can inherit from one 'module'.

Another resource of information on MVP in general is http://www.gwtproject.org/articles/mvp-architecture.html

NOTE: All strategies which involve keeping sessions open for longer time are potentially problematic. An open session requires to keep a database connection open as log it exists. In situations where multiple users are accessing the system at the same time the connection pool may either run out of available connections or the performance will go down since the clients will need to wait for connections becoming available again. The longer a session is the higher the risk that thready are becoming blocked since they are waiting of database connections. Long conversations also cause an higher load on the database itself by forcing it to manage long transactions logs of the whole session lifetime. A system build on long sessions, conversations will not scale well and is potentially vulnerable to DOS attacks. The below linked post The OpenSessionInView anti pattern gives more details on problems with the OpenSessionInView pattern which is the one of the long session pattern which is having the least problems.

The only strategy to avoid LazyInitializytionExceptions which will scale well is to use the DTOs or entity bean initialization strategies!

Known strategies to solve the LazyInitializationExceptions problem and in more general to manage sessions include,

For an in depth understanding on the different strategies of managing hibernate sessions in webapplications, please read:

This issue relates to the problem that in the Vaadin framework it is not possible to autowire beans from the underlying application context as Vaadin prevents this possibility. To overcome this problem, a singleton helper class eu.etaxonomy.cdm.vaadin.util.CdmSpringContextHelper has been written to retrieve the beans given the bean name.