Development and implementation Notes for the CdmDataportal

The CdmDataPortal is being developed as a module for Drupal It runs on XML REST services provided by a CDM CommunityStore. These Webservices are based on the Cdm Remote API. The specific requirements of the CdmDataportal are documented by an inventory of the data access functions of the dataportal prototype.

Requirements to the data portal are documented on the following pages:

The PortalRequirements are gathered by the WP6 exemplar groups, mainly by creating 3 different mockup/prototype sites:

The current mockups for the 3 WP6 exemplar groups can be found here: 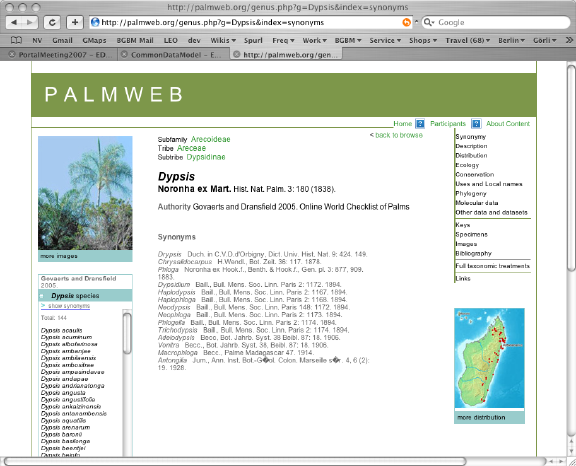 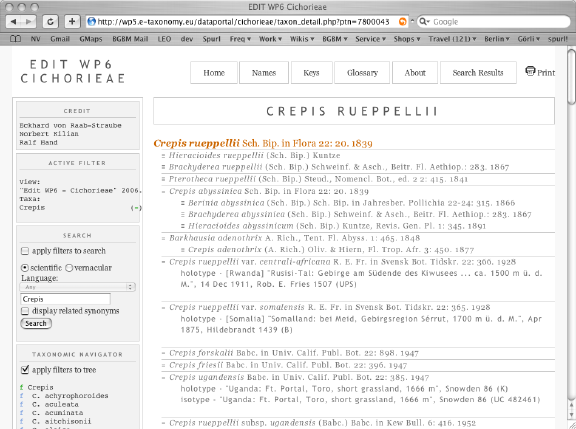 The dataportal runs on the CDM Web Services. These REST services are provided by the CommunityStore and expose the contained data.

In terms of the Drupal CMS":http://drupal.org/ a page is often diplaying the content of a single "node (= entity of information) or the data of many nodes aggregated in some way.

Blocks are small, self-contained units of information typically displayed in navigation areas or side areas of the page, but can be placed anywhere on the page. They provide small views of information that are embedded in the presentation of other nodes. Modules provide basic blocks used to display their content. Administrators can create new blocks based on existing blocks, or write PHP code to directly query and render content inside a block.

The data portal always represents a specific view on the taxon names. Therefore the dataportal rather shows taxon concepts but just names. The names list may be quite lengthy, so a paging mechanism is required.

Names accepted by the current view:

The taxon page gives detailed information on a taxon, it shows:

Name with citations and reference to the valid taxon page.

A block showing statistics on the data. For more details please refer to #12

Where will annotations, comments, etc. be stored?¶

The rest client which queries the CdmWebservices is implemented as a general drupal module. This module (cdm_api) provides a simple to use php api allowing to retrieve data from CdmWebservices which deliver data either in XML or JSON.

Links, taxon names, and other stuff for testing is found in the CDM Dataportal Bookmarks.

Which java script framework should we use in Drupal for dynamic page elements?