It turned out that the originally reported problem was not a technical one but rather caused by the users sightlessness which was caused by a bit of hurry and the UI.

The original description is retained below:

Original subject: "Name Editor is not being refreshed after changing the name and taxon details"

After editing the name and taxon details the Name Editor still shows the old data: 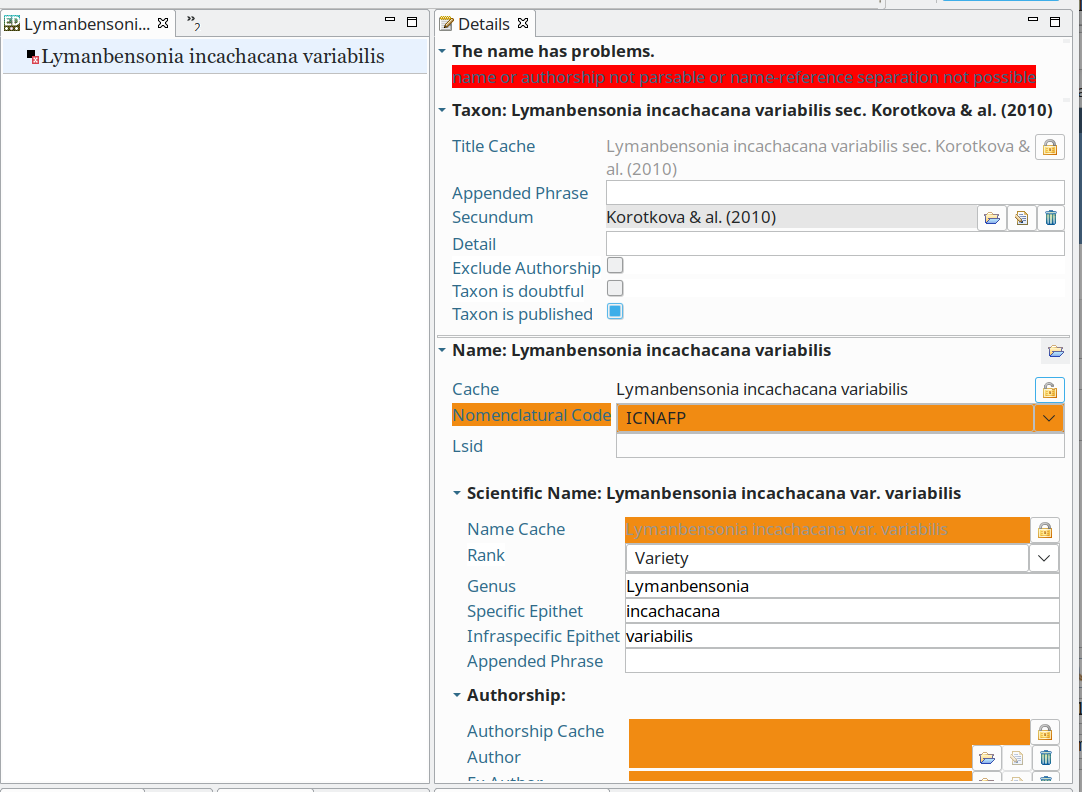 #1 Updated by Andreas Kohlbecker over 1 year ago

Ahh, now I understand the problem, it is the TaxonName.titleCache which is still protected.

I completely overlooked that this lock icon still is in unlocked state.

I am having the impression that the UI is not clear enough regarding the various caches and their protection states, whereas the following problems exist:

The idea of coloring the unused fields can never be applied consistently to the UI, there are always situation in which the various cache-field dependencies will cause conflicting modes of the coloring scheme. I think we should consider to only modify the appearance of the cache fields, namely in that situation when they are irrelevant. This is much easier to handle since always consistent. The appearance of all other fields should not be changed. at all
Locked cache fields (padlock icon unlocked) could be renders as if they where ...

#2 Updated by Andreas Kohlbecker over 1 year ago

#3 Updated by Andreas Kohlbecker over 1 year ago

#4 Updated by Andreas Kohlbecker over 1 year ago

#5 Updated by Andreas Müller over 1 year ago

I can't see this. Probably the current implementation, which is not yet fully correct, does not handle it correctly but I am pretty sure that it can be done consistently. The only semantics it has is "this field will not be taken into account when a cache is used". We already discussed that if multiple caches exist we need to work with various colours to clarify that certain fields are used only for 1 cache but not for the other one. Ofcourse this is not always fully intuitive as you need to know how to read it.
However, the important tasks here are:

The solution you suggest (and which we had more or less implemented in the past) does not fullfil this IMO. I not so seldom get request like "I entered data but it does not show up". It is enough then to ask if the field is colored. If you have to ask if one of the 3-4 cache fields are maybe protected/greyed out/have a text box border or what ever users will be more confused as they do not understand the cache fields anyway and especially not the multiple caches used in the taxon/name details view.

However, I fully agree that the current implementation still needs to be improved. There are tickets for this (also one which is resolved but needs to be given feedback as it is not yet fully correct, just had no time yet for this)